The Comer Group has agreed to sponsor the Irish St Leger for the next three years. They will use their support of the race to promote Palmerstown House Estate, a luxury hotel and golf resort located close to Naas in County Kildare, which they purchased last year.

2014 will mark the 100th running of the Group One Classic taking place at the Curragh on Sunday 14th September and the new sponsorship deal has ensured that there will be a substantial increase in total prize money for the race from 200,000 euro in 2013 to 300,000 euro this year, making it one of the richest races of its kind in Europe.

The 14 furlongs contest will be one of the highlights on Day Two of Irish Champions Weekend, which features a fully sponsored star studded programme at the Curragh including the Group 1 Moyglare Stud Stakes and Group 1 Goffs Vincent O’Brien National Stakes. Other races will include the Group 3 Flying Five Stakes, which will be sponsored by Derrinstown Stud for the first time, while Moyglare Stud will also add their name to the prestigious Group 2 Blandford Stakes for fillies and mares.

Luke Comer, Chairman of the Comer Group said: “We are delighted and honoured to have been given the opportunity to sponsor this great Race and we look forward to a very exciting three years working with the Curragh Racecourse helping to ensure that The Irish St Leger remains one of the most prestige and important Classic Races in Europe”.

Evan Arkwright, Commercial Manager of the Curragh Racecourse, commented: “We are very grateful to the Comer Group for their generous support of the Curragh and delighted to welcome such an exciting new sponsor to coincide with both the 100th running of the Irish St Leger and the inaugural Irish Champions Weekend.   Our priority will be to attract the very best staying horses from Europe and ensure the race continues to be the premier trial in Europe for the Emirates Melbourne Cup” 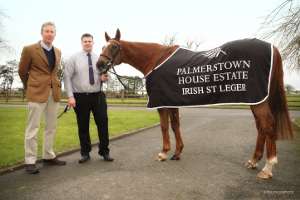 1993 and 1994 Irish St Leger winner Vintage Crop launches the sponsorship of the Palmerstown House Estate Irish St Leger by the Comer Group with Luke Comer Managing Director of the Comer Group Ireland and Evan Arkwright, Commercial Manager of the Curragh Racecourse. The Group One Classic will take place at the Curragh on Sunday 14th September as part of Irish Champions Weekend.

The Comer Group is one of the United Kingdom’s largest and most successful property companies. It now has property interests that extend into Europe including Ireland, UK and Germany and the United States.

With a substantial land bank and an extensive development programme, The Comer Group is continuing it’s major expansion in a number of property development sectors. The proven exceptional financial acumen of The Comer Group together with the direct and hands-on management style of the Comer brothers enables it to positively predict trends ahead of the market and capitalise on new opportunities as they arise. A lateral entrepreneurial management structure facilitates rapid transaction completion without a lengthy corporate process that many of it’s competitors have to undertake.

Palmerstown House Estate in located in Johnstown Co. Kildare next to Goffs.  The magnificent Estate features a well established championship golf course and will feature a luxury 22 bedroom hotel which is due to open in May. The house which was originally build in 1872 by the 6th Earl of May, it was completely rebuild in 1923 following a fire during the Irish Civil War. It was purchased by US heiress Ann Bulitt Brewster in 1956 who sold the property to the late Jim Mansfield in 1999. The Comer Group purchased the property in 2013.

It is very appropriate for the Curragh to renew an historic link with Palmerstown House, which was previously owned by the late Ann Brewster, who owned the 1958 Irish Derby winner Sindon and she trained many winners at the County Kildare venue as the first licenced lady trainer in Ireland

Irish Champions Weekend will be jointly hosted by the Curragh and Leopardstown on the weekend of 13th and 14th September. It will be an amazing sporting and social event combining history, glamour, excitement and prestige.

The Weekend will be action packed with the focus on showcasing Ireland as a world centre of excellence for horse racing and breeding.

Racing will take place on Saturday 13th September at Leopardstown featuring the Group One Irish Champion Stakes and Matron Stakes. Sunday 14th September at the Curragh features three Group One races, including the Palmerstown House Estate  Irish St Leger, the premier trial race in Europe for the Melbourne Cup. Before racing, the many racing and breeding operations located close to the Curragh will open their doors to visitors