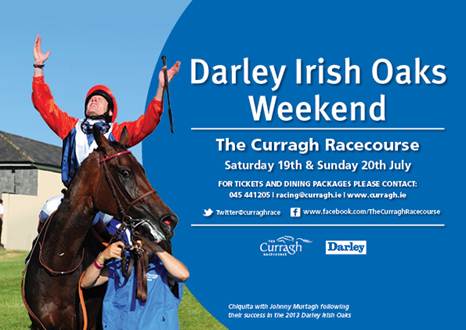 The Curragh will give their race day on Sunday 20th July a strong military theme to promote the close association between the Defence Forces and the racecourse.

Defence Forces Race Day will feature seven races including the Meld Stakes for the Defence Forces Cup, with the Chief of Staff Lieutenant General Conor O’Boyle, presenting the Cup to the winning owner.  Meld was a legendary racehorse who won the Fillies Triple Crown of races in 1955.  Other races include the Group 2 Kilboy Estate Stakes, 100,000 euro Rockingham Handicap and Fegentri Race for some of Europe’s top lady riders.

The race day will help raise funds for the Army Benevolent Fund and Organisation of Ex Servicemen and women.

Lieutenant General Conor O’Boyle commented: “For generations, the Curragh has been synonymous with both the military and equine communities. I am delighted that the Curragh Racecourse is celebrating this time honoured connection by hosting a race meeting in aid of the Army Benevolent Fund and the Organisation of National Ex Servicemen and women”.

There will be great spectacle and pageantry throughout the afternoon with displays of current and vintage equipment, memorabilia and music, while the Leinster Football Final will be shown on screens throughout the racecourse.

Paul Hensey General Manager of the Curragh Racecourse commented, “Our objective is to develop an annual race day to promote the excellent and very historic relationship between the Curragh and Defence Forces, where their personnel both past and present get together with the horse racing fraternity for a fun day out for all the family”.

A special discounted admission offer will be available for Defence Forces personnel both past and present with a percentage going towards the fund raising activities which will be taking place throughout the race day.

The Darley Irish Oaks takes centre stage on the previous day, Saturday 19th July, with some of Europe’s top fillies expected to line up in the Group One Classic.  Epsom Oaks winner Taghrooda is on target for the race and is expected to face the Dermot Weld trained Tarfasha who finished second at Epsom, while the home trained team could also include recent Ribblesdale Stakes winner Bracelet and Etihad Airways Irish 1000 Guineas winner Marvellous. Other races as part of the exciting race programme include the Jebel Ali Racecourse & Stable Anglesey Stakes and Group 3 Minstrel Stakes.

Related posts
Leading Light and Royal Diamond set to clash at Curragh this weekend
August 22, 2014
Superb weekend of racing at the Curragh on Saturday and Sunday 23rd and 24th August
August 20, 2014
Gay and Kathleen Byrne to be honoured at Curragh this Weekend
August 20, 2014
Keeneland Phoenix Stakes set to be juvenile race of the season
July 24, 2014
Go Racing in Kildare 2022