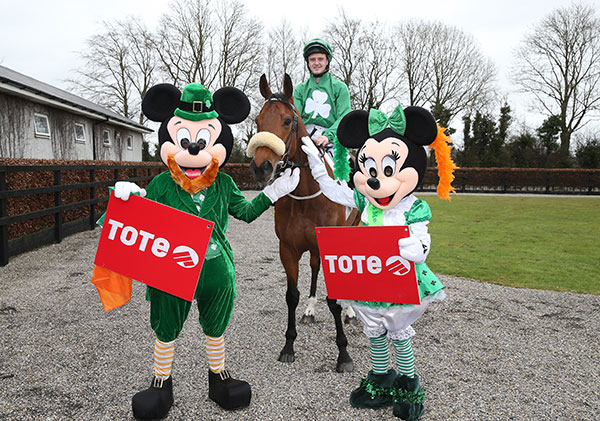 THE Curragh heralds in the 2016 Flat Season this Sunday 20th March when the 100,000 euro Tote Irish Lincolnshire Premier Handicap and the Group Three Lodge Park Stud EBF Park Express Stakes are the twin features on an exciting seven race programme which commences at 2.10pm. The race day is part of the St Patrick’s Festival for the first time.

A total of 31 horses have stood their ground in the Tote Irish Lincolnshire, including last year’s hero Onenightidreamed trained by Tommy Stack and Aussie Valentine, which finished runner-up and was only beaten one length.

“Onenightidreamed is in great form and the intention is to run him on Sunday, commented Fozzie Stack representing his father. “He has a touch of class to him but he needs soft ground to be seen at his best. We didn’t run him after May last year because of that so hopefully he will get his ground on Sunday.”

Ashraf represents the powerful Dermot Weld stable and is likely to head the market. The Aga Khan-owned four-year-old was also sparingly raced last season. The son of Cape Cross landed the mile maiden at this fixture 12 months ago in taking style after which he finished a very respectable fourth behind his stable companion Zanda in a Listed event at Leopardstown in October. Withernsea, Gabrial’s Kaka, Sheila’s Buddy and Spring Offensive and the four British-trained raiders remaining in the line-up.

The once raced Fluff is among 12 entries for the Group Three Lodge Park Stud EBF Park Express Stakes. The Aidan O’Brien-trained Galileo filly created a very good impression when she easily landed her maiden at Navan last April after which she was retired for the season. “We have been very happy with her over the winter and she is ready to go,” said trainer Aidan O’Brien. “She will definitely benefit from Sunday’s race as will Bravery and Claudio Monteverdi which are both likely to take their chance in the Irish Stallion Farms EBF Three-Year-Old Maiden.”

There are 18 entries for the opening Tally Ho Stud Two Year Old Maiden and 18 also in the Plusvital Madrid Handicap.

Traditionally Aidan O’Brien brings a team of horses up from Ballydoyle to work after racing at this fixture and that will be the case againthis Sunday when all of his big stars will be on show . The list includes:

Three-Year-Old Fillies – Alice Springs, Ballydoyle, Best In The World, Coolmore, Even Song, How High The Moon, Kind Of Magic, Minding and Pretty Perfect.

The ground at the Curragh is currently Soft to Heavy with a dry forecast for the remainder of the week.

Trains to Kildare Town with free shuttle bus to races