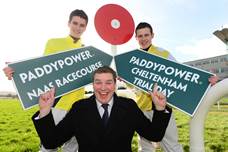 The Paddy Power Cheltenham Trial day on Sunday February 23rd is one of the key fixtures in Naas Racecourse’s calendar, as Cheltenham-bound contenders have their last prep race before heading across the water. Denis Kirwan and Robbie Irwin (RTÉ) will be on hand with a morning line and Cheltenham preview, as they interview leading jockeys and trainers before the festival in a few weeks’ time.

Tom Ryan, Manager, commented: “Year after year this progressive card produces numerous top-class Grade 1 winners. Last season, the paddypower.com Novice Hurdle was seen as the outstanding prep race throughout Ireland as the first three home, Annie Power, Defy Logic and Don Cossack, all went on to become Grade 1 winners. Mallowney, trained by Tim Doyle, won the Handicap Hurdle and looks to be the Grade 1 Novice Chaser to watch this season. We look forward to seeing what stars will be unearthed this year.”

Paddy Power, sponsoring the Naas Racecourse Cheltenham Trial day for the ninth year have consistently maintained their significant contribution to the prize-money and are involved in all elements of the day.

Paddy Power commented: “We look forward to making the 2014 Paddy Power Cheltenham Trial day the best one yet. We fully support Tom and the team at Naas Racecourse as they encourage people to come racing. Large numbers of our customers will be availing of the free admission tickets in our shops now. An extensive series of Cheltenham Preview interviews will be conducted throughout the day, as hopefully we can give our loyal customers the inside track to Cheltenham. ”