Killultagh Vic books his place on the boat to Cheltenham 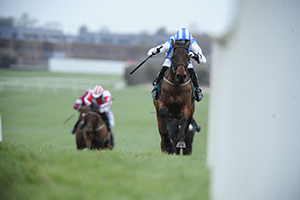 Killultagh Vic has secured his place as part of the Willie Mullins team on the road to Cheltenham after he won the Paddy Power Bumper at Naas Racecourse on Sunday. Killultagh Vic  beat favourite Golantilla by 16 lengths; his odds have shortened from 33/1 to 11/1 for the Cheltenham Bumper.

Willie Mullins said: “I got a text from Ruby coming down off the stands saying ‘he’s another one for the boat’ and I’d say he’s right! He’s improving with every run and that was a terrific performance after making the pace and to be able to quicken again off it. It looks like we have four horses for the Cheltenham Bumper at the moment and along with this fellow, Shaneshill, Black Hercules and Saturday’s winner Westhorpe could all go.”

Runner up Golantilla, trained by Tony Martin, made his seasonal reappearance at Naas and is also aimed at the Cheltenham Bumper, coming third last year.

Robbie McNamara, rider of Golantilla, said: “He travelled really well for 1 mile 6 furlongs but he just needed the run on that testing ground; he’ll improve a hell of a lot from that though.”

JLT Chase entry Mozoltov made it a double for Willie Mullins, landing the Grade 2 Woodlands Park 100 Club Nas Na Riogh Steeplechase. Mozoltov beat Folsom Blue by 35 lengths after a mistake at the first and the last fence. 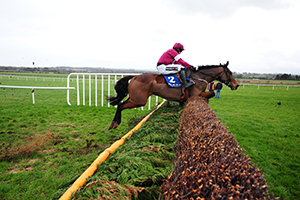 Willie Mullins said: “He has been making those mistakes before but I feel it was more to do with him not having company today and being out on his own throughout. He is in the JLT Novice Chase and we’ll see how he comes out of this before making plans.”

Next racemeeting at Naas Racecourse is Sunday the 9th of March featuring the Woodlands Park Leinster National. First race 2.30pm.

Dick Whittington set for Curragh this Sunday
April 14, 2015
Longines Announced as Title Partner of Irish Champions Weekend
March 31, 2015
Gold Fever to Sponsor ‘Best Dressed Lady’ at The Punchestown Festival.
March 27, 2015
The Curragh set for 2015 Season
March 26, 2015
Go to Top
We use cookies on our website to give you the most relevant experience by remembering your preferences and repeat visits. By clicking “Accept”, you consent to the use of ALL the cookies.
Cookie settingsACCEPT
Manage consent